No one tells you when you become a parent how many internal conflicts you are going to have daily, weekly, all the time! No one tells you that you are constantly going to wonder if you are making the right choices or saying the right things to guide your kids in the best direction. It's bad enough that before you have kids, you have to make so many decisions that affect your future good & bad. When you have children, you have to make decisions that will affect their future. That is a super scary thought for me. I don't want to be responsible for messing their lives up. I never know if I am making the right choices for my children... like what foods to feed them, what school to send them, daycare, routines, family time, time outs, tv time, organic or not organic, how to raise them both to respect themselves and others, how to make sure they have values & morals... and the list goes on and on. I see older mis-behaved kids or kids that have gone down a bad path in life - and I can't help but secretly pray that my kids will not turn out to be like that ... but how can I really prevent it? I don't know. All I can do is try my best. Maybe those 'bad' kid's parents thought they did their best too.

Lately I have had some major internal conflicts about how to handle my daughter's behavior. She is 3 and 1/2 years old ... and she whines A LOT. She whines and cries to try and get her way almost every time. She whines when she gets up in the morning, afternoon and evening too. She throws demands out there and tests us constantly. She yells she doesn't want me, she ONLY wants Daddy. Daddy daddy daddy. Daddy can do no wrong in her eyes. I know some of this is a daddy-daughter thing, but she goes way beyond that. It hurts my feelings and makes me so sad when she doesn't want me near her. I am truly starting to think I did something wrong to make her behave this way. I try to not give in to her demands and crying (to get what she wants) because I know it will only make her think she can do it again and again to get her way. I can't help but blame myself for her behavior some days like I caused it or did something wrong. Maybe I put too much pressure on myself to try and keep her 'perfect'.

Some of Julianna's behavior totally stems from her jealousy of Tyler like when she tells Daddy to 'put Tyler down now' and hold her. When Tyler gets attention over her, she hates it. She does love Tyler because I see how she interacts with him daily, and I know she would never do anything to him.... however she is clearly jealous of the attention he gets and the time it takes away from her time with us. How long does this last for? I thought by the time Tyler was 5 months old, it would have subsided, but I guess not. Julianna doesn't act out as bad as she did when he was first born, but she does still have a lot of issues with him being here. I guess you could say she has her own internal conflict. No matter how much time we spend with her, it's still not the way it was before. Life has changed for her with the birth of Tyler, and she just has to get used to it. Heck - I am still getting used to 2 kids!

Recently, we spent the day in the city with our friends and their 5 - yes five - kids. I was beyond amazed at how well behaved their kids were - and how easily they went with the day. Julianna was OK but not great. She whined & stomped her feet to get her way several times. She had a couple small tantrums and had an attitude when we tried to get her to do a few things she did not want to do. She refused to give up the stroller for Tyler when we tried to move him into it from the front-pack...which brought on another tantrum. So annoying in the middle of the new York City Subway platform with 500 people around you. I was so embarrassed and felt like I was "THAT" mom with "THAT" kid that everyone can't wait to be away from. I was talking to Brian on the way home and actually started to think maybe I (we) did something wrong. With that said, Tyler did great. He was in his carrying pack with me or Brian wearing him all day. He loved it. We had a very nice day all in all... will post about that another time.

Brian and I had another (OMG!!) incident about a month ago where both kids were melting down at the same time (like REALLY REALLY SUPER REALLY bad) in a restaurant, and we had to get our dinners to-go and leave fast. We were there with our friends and I have never ever been forced to leave a restaurant because of my kids - It was my choice but no way was I staying there. We have been bringing Julianna out to eat since she was 3 weeks old. Same with Tyler. We did it so we could still have a life and go out with them - and we tried like heck to not be THOSE parents with THOSE kids. You know the ones. Oh wait, that is us! Ha! Then to top it off, some older woman said something to me to the effect of 'they moved their table because of my kids misbehaving'. I was in 'block-out' mode at that point because of Tyler & Julianna screaming. I felt like everyone was GLARING at us and cursing us under their breathe.
I was beyond mortified. I couldn't pack up my stuff and grab our kid gear and dinners fast enough. I did not even hear the old lady comment until my friend who was there told me later what she said. (p.s. my pregnant friend went and told off the older lady after we left - Kudos to her!). Mind you we were in a super-kid-friendly place too. Even the owner came up to us outside and told us he felt so bad for us and asked if there was anything he could do.
We will go back there... it's one of our favorite places to eat ever. But I have to tell you, I am a little traumatized and it might take a while to work up the nerve to go back. I am still traumatized.
All I wanted to do was leave. I was so so embarrassed for my kid's behavior. I know Tyler can't help it, but Julianna was super-exceptionally terrible. I am talking top-o-the-lungs screeching & screaming - the blood curdling kind where she clinches her fists, turns red, screams & shakes! Kill me now. I know some of this is normal but maybe it's not. Nothing feels normal when she pulls that stuff. I'm just so conflicted because this is so difficult and I really do not know how to handle it sometimes other than praying for the earth to open up a hole and swallow me up. I have such patience with Julianna some days, and other days, I want to run away screaming (sometimes I do scream & yell too). Internal Conflict. Some days I think I have it all under control.. and other days I feel like my entire life is unraveling because I feel like I have no control over anything.

With all this said... There are tender moments that I have with Julianna that wipes the slate clean for me. She will hold my hand unprovoked or tell me she loves me or snuggle with me... It makes it all worth it. I will end it with the fact that I love my husband and my children more than life itself, however sometimes I need an outlet to vent about bad days we experience & feelings I have. I am only human right?!

We went apple picking a few weeks ago ...
These are the times that make the "bad restaurant" day even out. 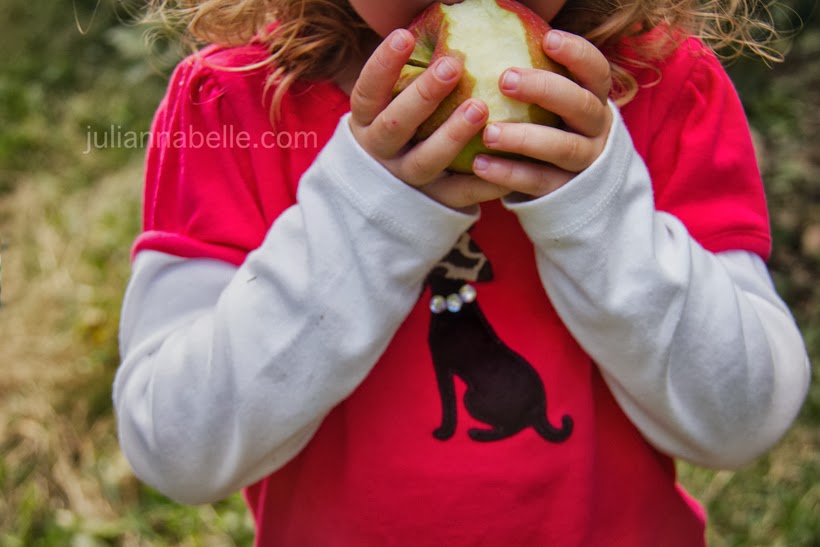 The girl loves her apples 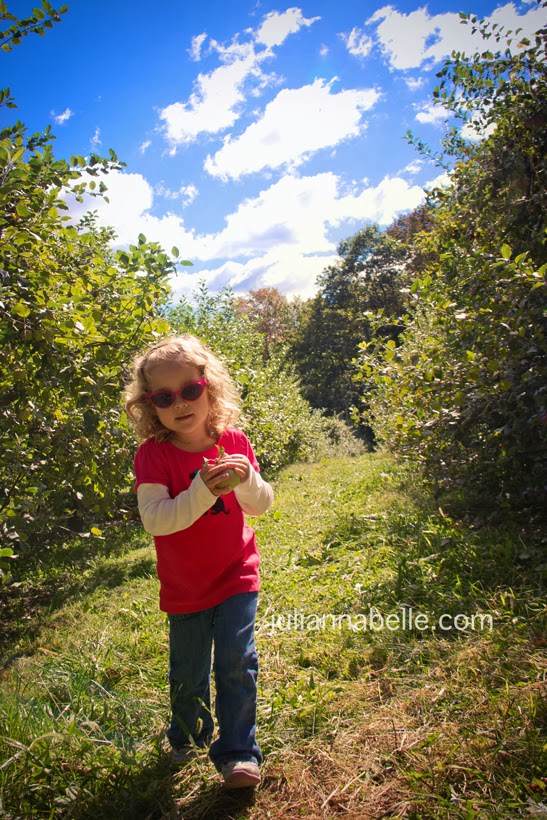 This is how we roll.... in the apple orchard 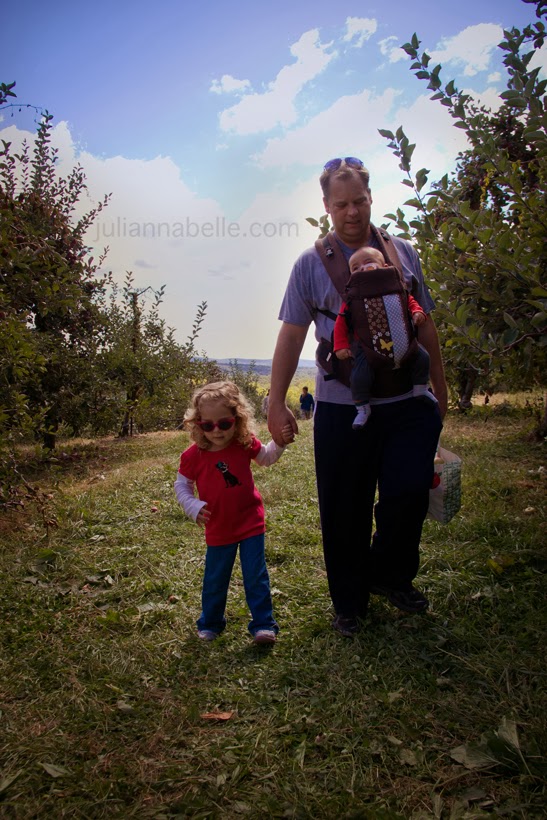 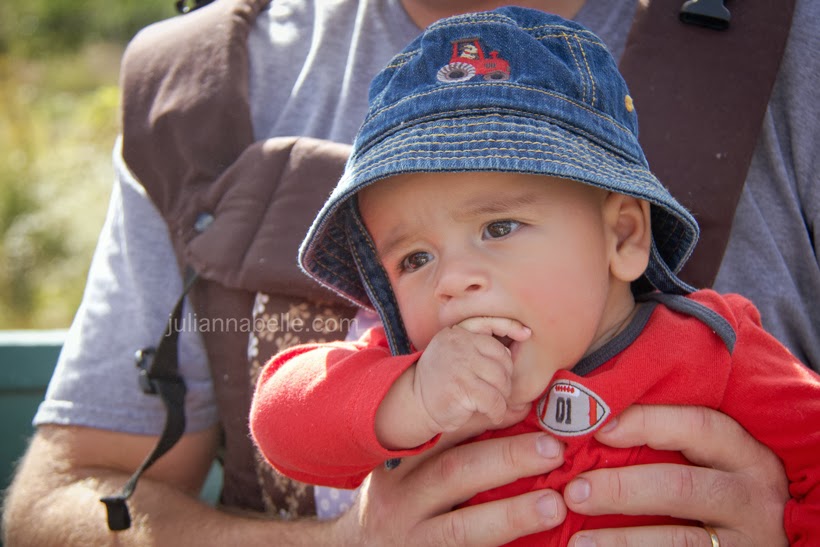 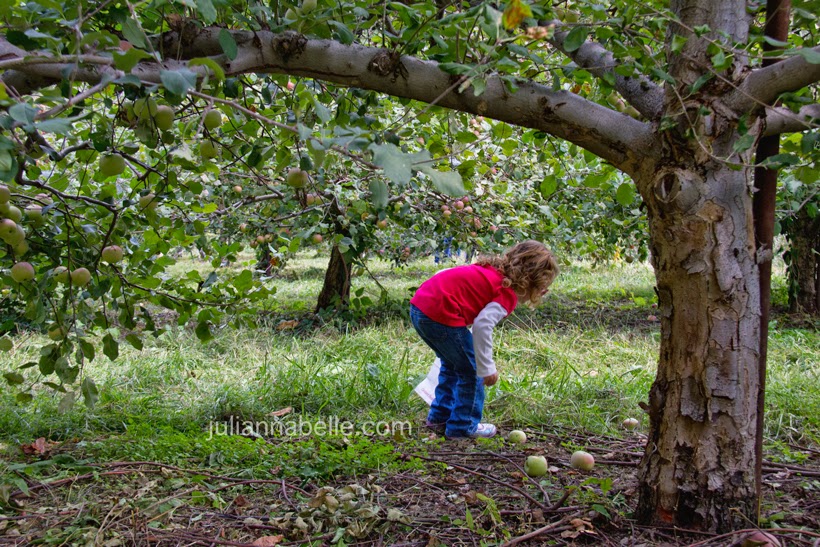 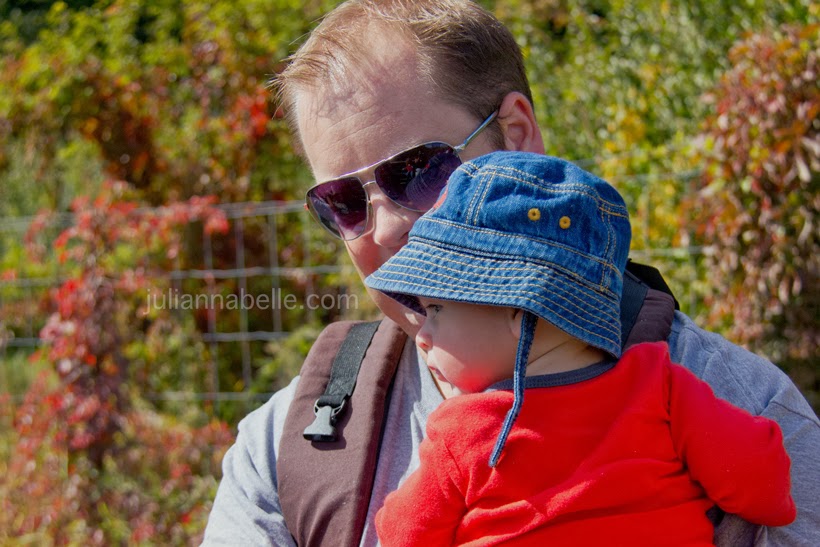 It takes time & patience to pick the perfect apple. 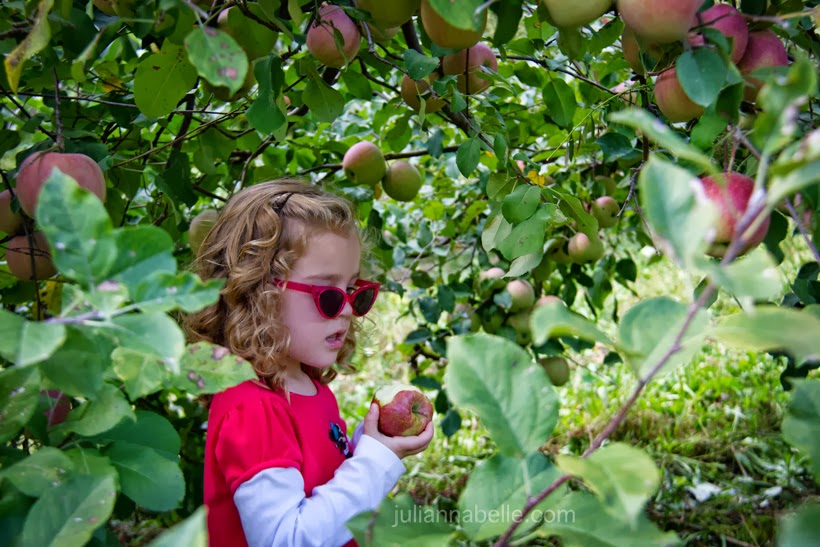 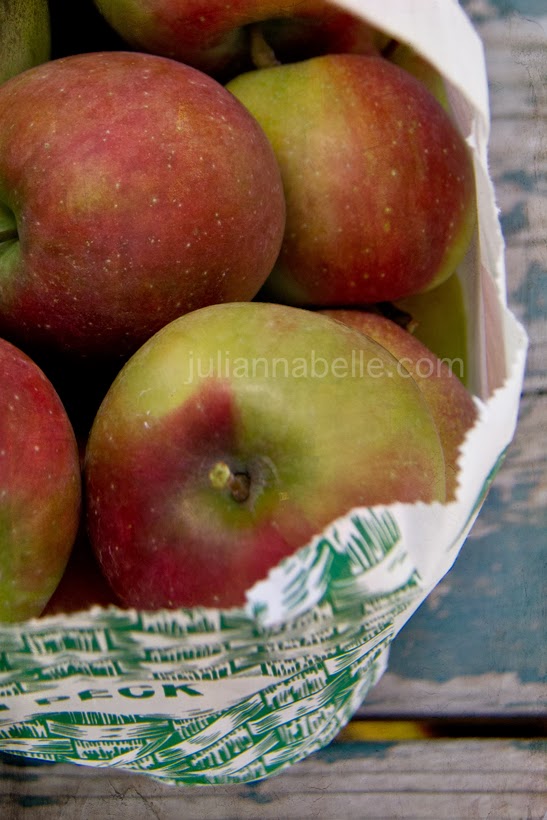 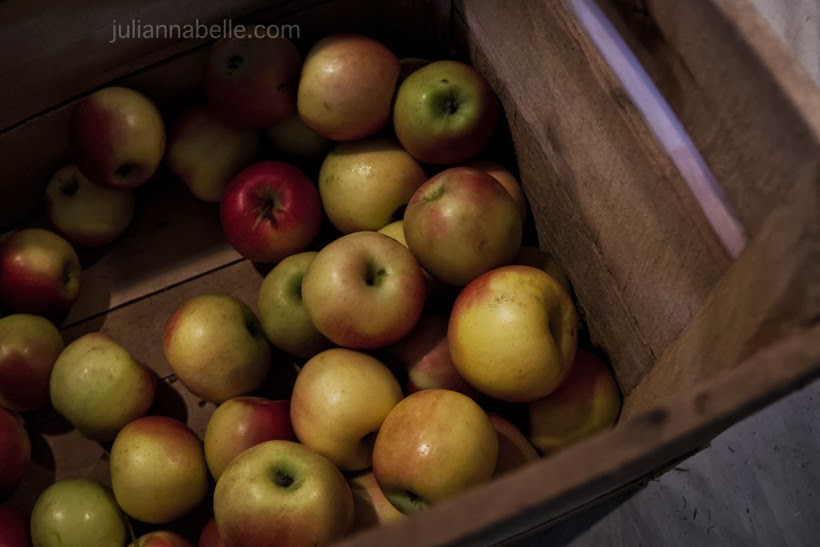