Babymoon happened. Even with the snowstorm! Brian and I thought for sure we were going to have to cancel this past weekend's spa getaway due to the snow, but it worked out for  us luckily.
Brian's parents were able to drive down here on Friday even with the storm. Somehow they did not hit snow until about 30 minutes west of our house. We were kind of on that border line of where he storm was cutting out. We got less snow than they predicted originally - only about 10-11 inches. East of us did not fair so well - Long Island and Connecticut got hammered with 2-3 feet of snow - ouch! Usually it's NJ that gets it, so we somehow lucked out this time.

So, my inlaws made it down here and we were able to leave Saturday morning to drive to Bethlehem  PA for our spa day and overnight visit at historical Hotel Bethlehem. Oh happy day! I was so upset on Thursday with the impending snow forecast thinking we would need to cancel. Good thing we didn't jump the gun & cancel the hotel!

We went to a Spa called "American Hairlines" in Bethlehem. It was very nice - certainly not DePasquale's Spa - but nothing really measures up to that really, so it's an unfair comparison. We both had a massage, facial, pedicure & manicure.... and we both loved the facial the best. I never had one before, so it was a very pleasant surprise. We've had massages plenty of times - but never facial. I would do that again no doubt!

Oh and the best part about the spa was, the employees are allowed to bring their dogs with them to work! While I got my facial, the therapist's pug named 'Juicy' slept under the table and even was snoring a few times- it made me smile and also relaxed me since I am a total dog person! One of the other workers has a mini-doxie he brings in but he wasn't there that day. What a great idea!

Our hotel room was very lovely - and we even had robes. Yay. I love the little luxuries like that. We went out to a local place called "Apollo Grill" for dinner. It was good but I did not feel that well while we were there, so we ended up wrapping my dinner to take back with us. I had a wicked headache and felt pretty queasy. Man this pregnancy stuff is getting old quick! Luckily I felt a little better later on and was able to eat some of my dinner back in the hotel room. The next morning, we slept in and went for a fabulous brunch in the hotel's historical 1741 room. Overall, we had an incredible 24 hours away from home. It was a successful baby-moon!

p.s. Julianna missed us but she was a good girl for Grandma & Grandpa ... she was so happy to see us when we got home too!

I didn't take as many pictures as I would have liked to but I did manage to get some ... It was very cold out and not conducive to walking around and being outside too much.


This was an old staircase leading up to the 1741 room in the hotel. 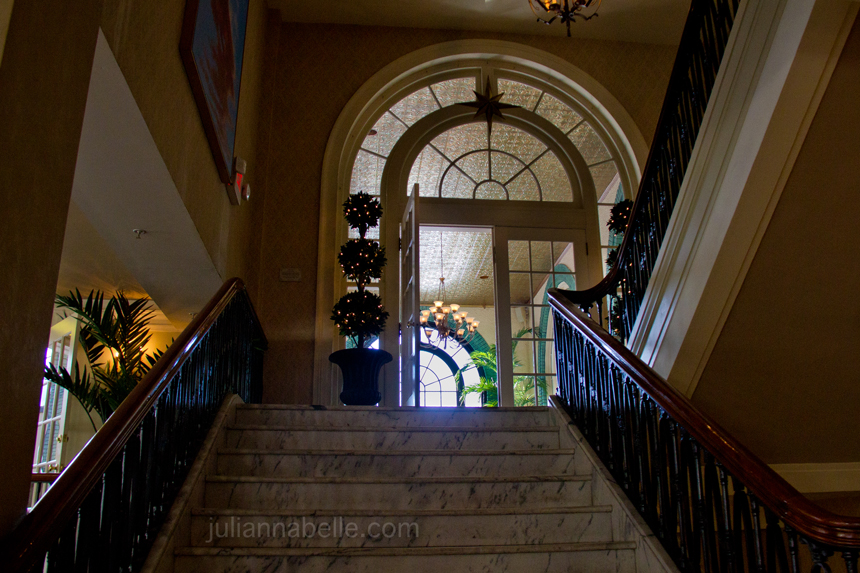 A picture of 'us' outside of the hotel. 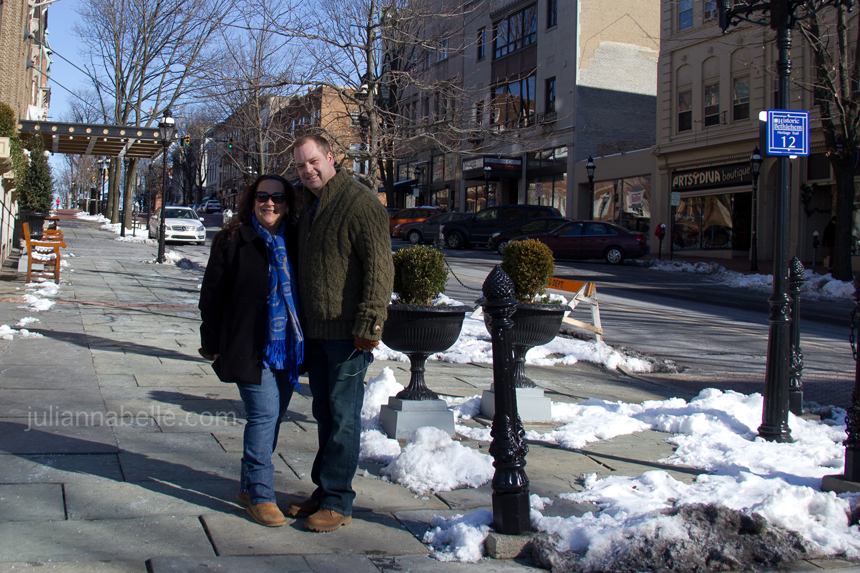 Hotel Bethlehem from the ground. 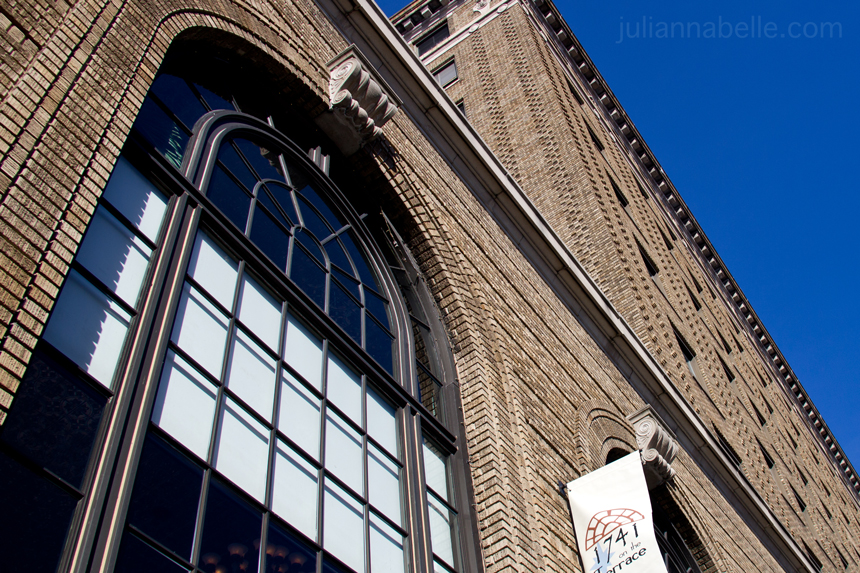 I love the buildings here. I wish we could have ventured out further than a couple of blocks.
We'll go back in the summer and do that! 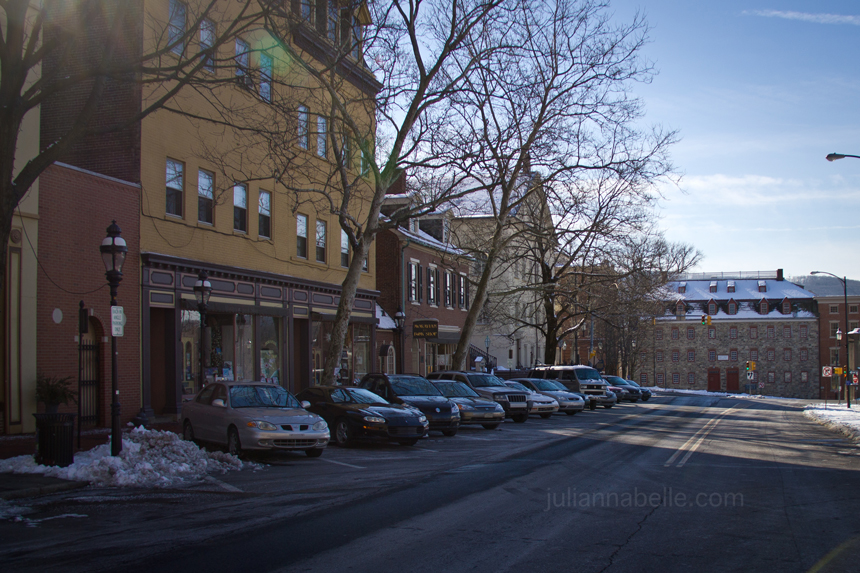 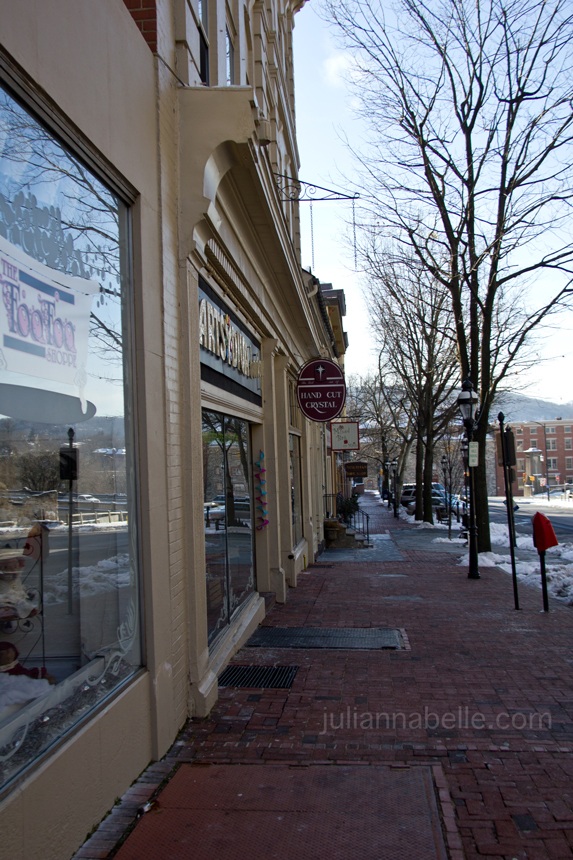 I love how the streets and sidewalks are brick. 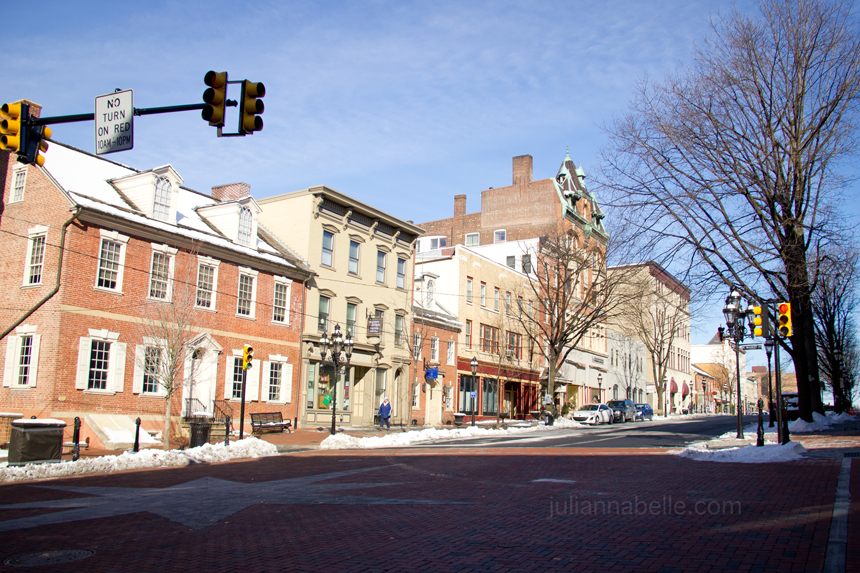 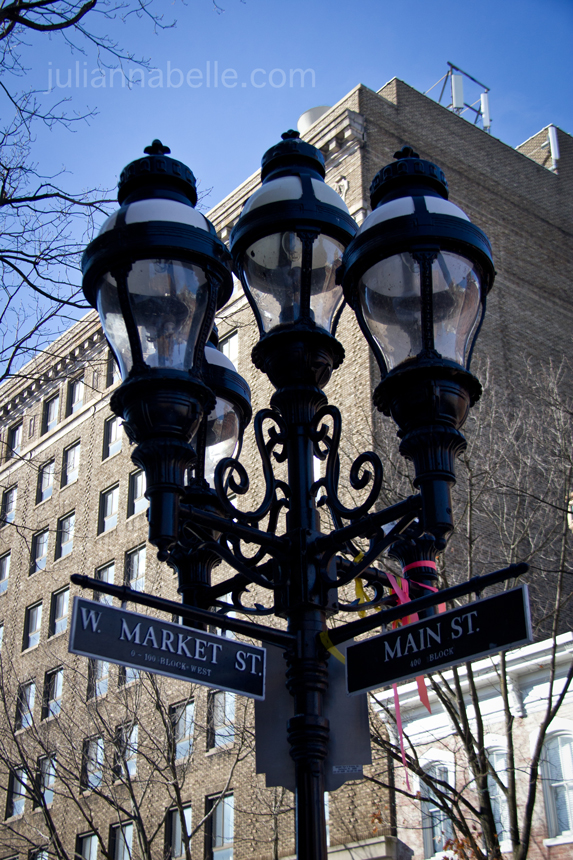 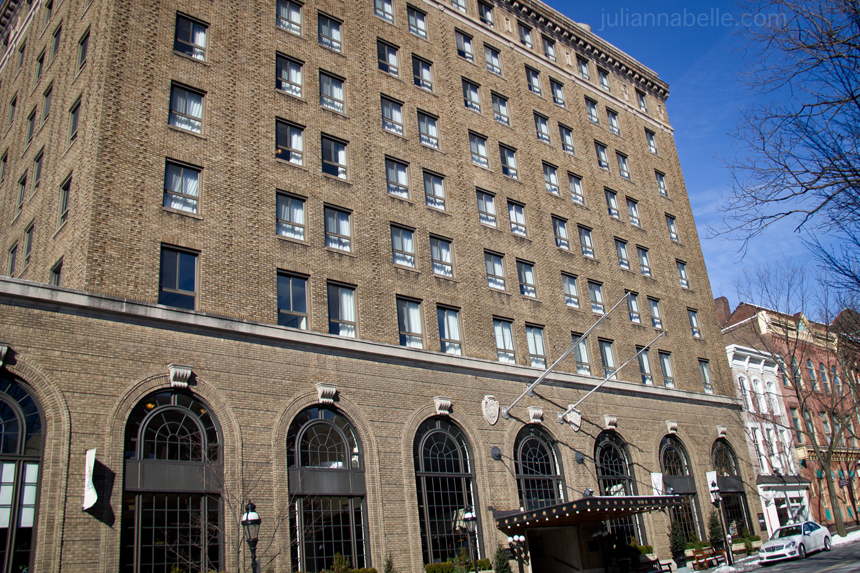 I thought this building was pretty cool! 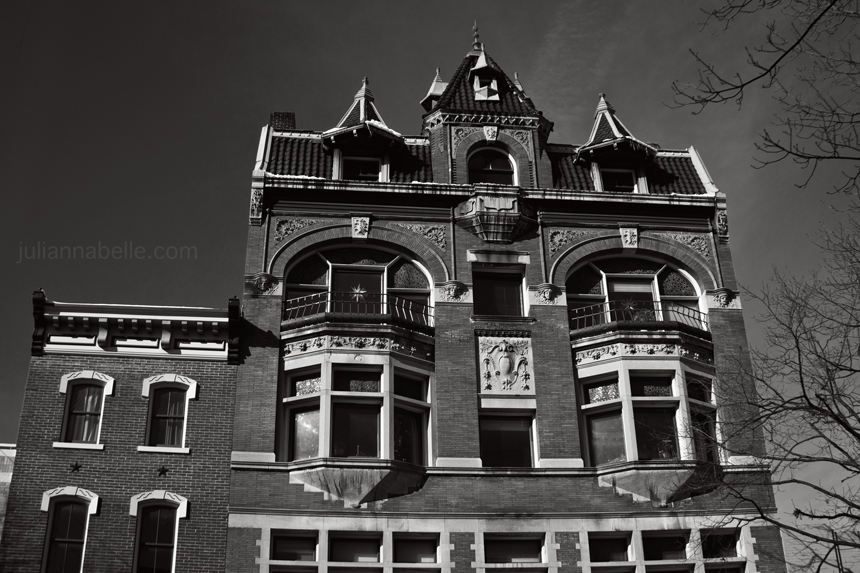 Tons of small, quaint restaurants on each street. 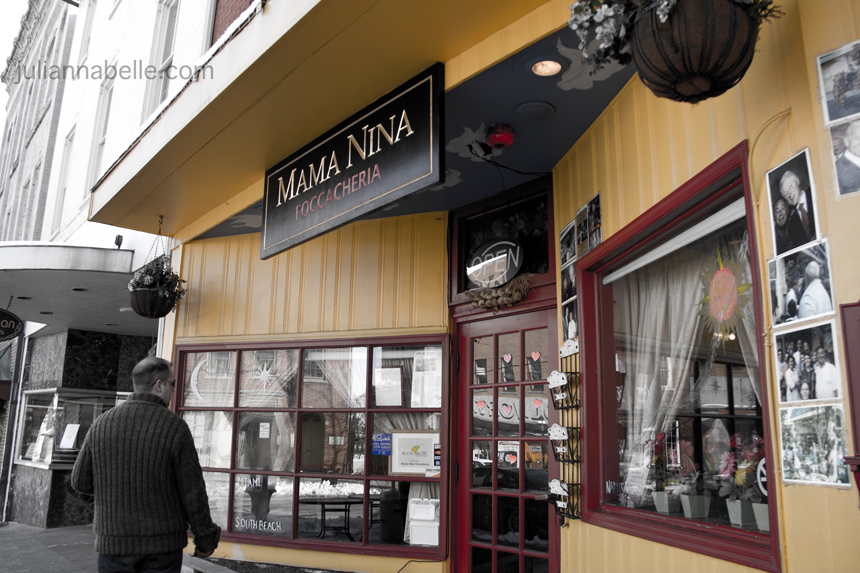 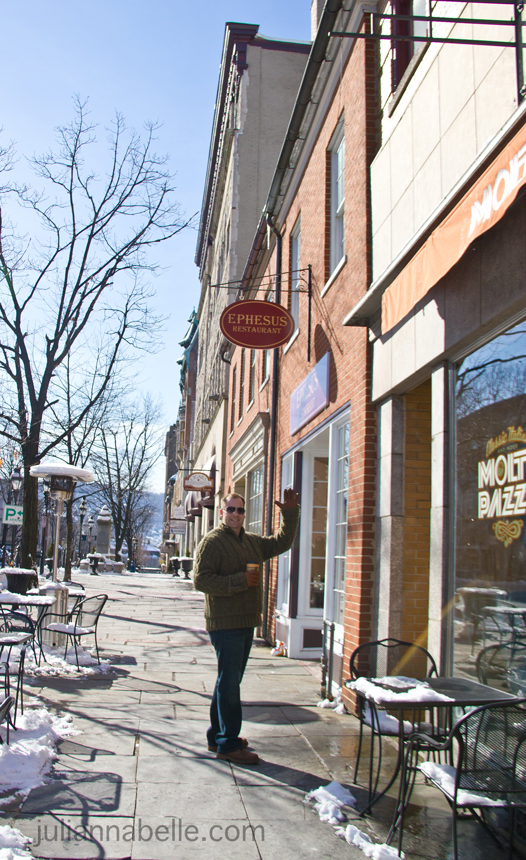 Each building had such pretty detail - I really want to come back in warmer weather and explore more!