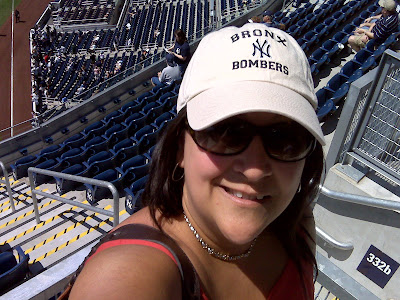 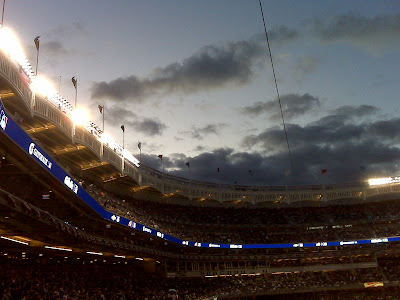 Today seems like a fitting day to talk about the New York Yankees. Rest in Peace George Steinbrenner.
I always loved the Yankees as a child as far back as I can remember -

When most adults recollect their childhood, they remember school plays they were in, the bike they rode, the dolls they got for Christmas, the house they grew up in, or their first dog they had.

When I recollect, I remember watching the Yankees games with my father, going to the games, and I remember when Thurman Munson died in August of 1979. I was at day camp and the camp counselors said he died in a plane crash. To this day, I still get teary eyed when they do a tribute on TV or at the stadium. Funny how I can remember that, but I can't remember what I ate for dinner last night. 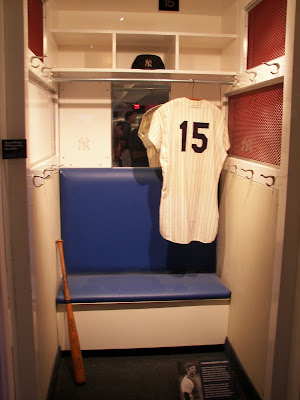 My father and I used to watch the games on WPIX (channel 11) with Phil Rizzuto & Bill White doing the play by play. Scooter was the best Yankee announcer hands down (in my time). I don't think, back then, that all games were broadcast on TV. Today all 162 are on TV and I don't miss any of them!

I grew up a die-hard Yankees fan and still am today. When I was a kid, my father took me to a few games every year. We used to drive into the Bronx real early, and go get breakfast at the breakfast shoppe off of River Ave - right under the Elevated subway. I wish I can remember the name, I think they are still there last time I was over on that side.

After breakfast, we would walk around the outside of the stadium and my dad would find someone to buy tickets off of. Little did I know we were 'illegally' scalping tickets for each game! LOL - What did I know? I was just the innocent child tag-along! I will say this- my father always got us great seats! He was a "Wheeler & Dealer" (typical salesman!). Back then, you could get 2 tickets right behind the Yankees dugout for $100 from a scalper. Now-a-days, forget about it, you have to take out a 2nd mortgage to get tickets in the same spot! And I would be too terrified to try and buy scalped tickets LOL.

Even if we didn't get great seats for some games, back then, you could still go into the stadium as soon as they opened the gates, and walk right down to field level and park yourself against the padded walls for batting practice. There was no security guard locking 'the peasants' out of the field level like there is now. The best part of the game was seeing batting practice and being 2 feet from the field! I never did get a ball or an autograph though! Now I have to be satisfied to watch batting practice from my seat in the upper deck.
Some of my favorite players from back then were; Don Mattingly, Willie Randolph, Dave Winfield, Reggie, Rickey Henderson, Thurman Munson, Guidry...

Sadly I lost interest with the Yankees in the 90's (of all times to stop paying attention!) Around the time Mattingly stopped playing, I lost interest for a while, not sure why - and I missed the big championship years of the late 90's. I knew what was going on but I certainly did not follow my team like I used to. I wish I could go back and watch some of those games that I missed.

Enter Brian Fillmore.
When I met my husband in 2001, he was/is a big Mets fan (No one's perfect!). I am really not a Mets hater at all. He will be the first to tell you that. (He did own a Red Sox hat when I met him. I have since made it disappear 'by accident'.) 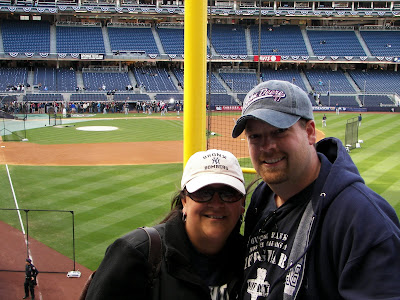 Brian and I got tickets for a game in June of 2003... I remember the feeling I got when I walked into Yankee stadium that day - I felt like a little kid all over again. It made me think about my father. The stadium had a way of making you feel like a kid - you would walk around with wide eyes and look around at everything, taking in all the names of the players that have played in that house! Some things have changed since I was a kid - Back then, a hotdog and a soda was probably about $5. Now, you can easily drop $100 on a couple beers, a hotdog, pretzel, and some peanuts. LOL. The darned scorecard alone is $10 now - and of course we need to buy one for every game we attend!
The game we went to in June of 2003 ended up being Roger Clemens 300th win - What a game to resurrect my love for the Yankees!!

After the "Clemens 300-win" game, I started to reconnect with my childhood and remembered how much I loved the game and my team - and how much fun baseball can be! And I am so thankful my husband feels the same way! Brian and I have faithfully gone to Yankees & Mets games every year - and we don't miss a game on tv or radio ever. I even count down the days to spring training in the winter!
Brian & I were in Florida last October during the ALCS playoffs. During dinner, I had my blackberry setup to MLB Mobile so we could follow the Yankees/Angels game. How's that for a super fan?!

We also went to the first ALDS playoff game last year (2009) vs. the Twins - Yankees won obviously & went on to win their 28th World Series. We splurged a little and got great seats and it was an amazing game! I had never been to a playoff game before. When Jeter hit that homer, the stadium went nuts, it was shaking. That was, technically, Julianna's first game. I was 4 weeks pregnant at that game! No $10 beers for me - darn!

All of this stems from my father's love for the Yankees - and he passed it down to me and I plan to pass it down to my daughter. I won't have to try too hard. Recently I reconnected with my father after many years... and one of the first things we did was watch an afternoon Yankees game on tv like old times. That was fun!
I want Julianna to enjoy the baseball experience like I did so she has her own memories to look back on and always remember. I want her to always remember going to the baseball games with Mommy & Daddy. It's America's past time for a reason.

We will tell her that she can like any team she wants - as long as the team colors are navy blue & white with pinstripes, and they play in the Bronx. She already has a good head start with many Yankees onsies, hats and t-shirts already! Thanks to my friends & family for that!

A note on New Yankee Stadium -
Yes, the New Yankee stadium is modern and accommodating. The seats are bigger, there are more food vendors, it's open & much more room to walk. The upper deck even seems much closer to the field.

Is it the old Yankee stadium? Not even close. You do not get that 'feeling' like you did when you walked in the old cathedral. Maybe it's b/c going there as a kid was so very special for me? 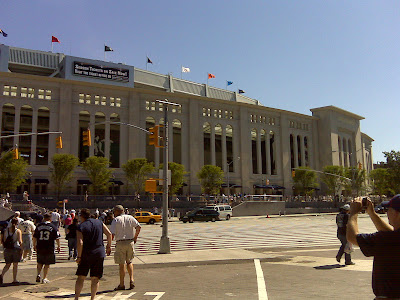 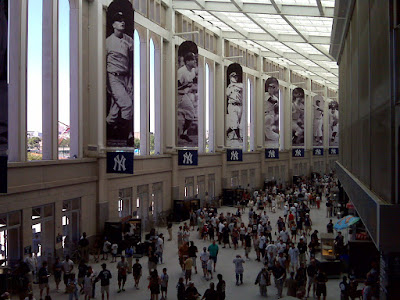 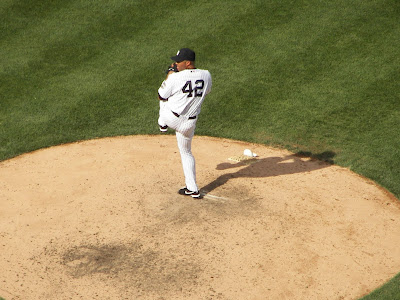